A Form of CAGED

Now that we have looked at the C form along with how to play the major pentatonic in that form, we will temporarily move away from C and go onto the next letter, A. (If this is your first visit, it may be helpful for you to refer to my first lesson on the CAGED method here)

As discussed, the open A chord is a Triad Chord. This of course means that it requires a root, 3rd, and a 5th. The diagram below draws out the location of the A chord: 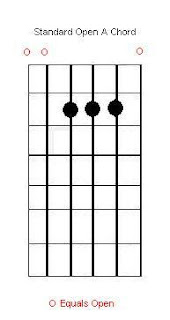 Because E is one of the notes in an A chord, you can strum all 6 strings without compromising the sound, when played open. The number structure of an A form chord (we'll skip the low E string) is:

Or you can repeat 1513 until you have the structure memorized. (Just so you know the actual notes played here are A, E, A, and C#). Later, I will briefly go over the major scale so you can figure out the notes of any scale on your own.

Moving up the neck of the guitar, pick a fret, and always remember to identify your roots! Since we now know that for an A form chord like C, the first root appears on the A string (second string). In the example below, we will play the D chord using the A form: 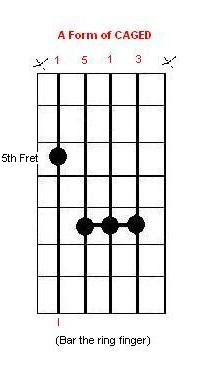 If you are having difficulty barring all three notes, try to practice slowly. If after practicing it still seems impossible, you can use your middle, ring, and pinky finger to play the bottom three notes on the chord. Try plucking each note one at a time and name that number. Finding the root is especially important. I can't stress that enough. Once you identified your roots, you are almost there. Remember the pattern and play that chord.

Try going up and down the neck. Identify the roots and their corresponding letter names. Challenge yourself some more and try to name the notes of the 3rds and 5ths. I hope you are starting to notice the pattern here.
Posted by Guitar Man at 8:38 AM No comments:

About Guitars I've Owned Past and Present

Take some time to really practice the Major Pentatonic mentioned below. If you have any questions, please feel free to comment me. If something is wrong, please let me know, we are all teachers and students in the world of music.

Occasionally, I will use this site to discuss the ins and outs of the guitar. This is a newer thing for me. There are probably plenty of sites that break down the mechanics and design of the guitar nice and thoroughly. Me, I'll try to keep it simple, and hope to reinforce the workings of a guitar myself by writing about it.

To start off, I currently play a Larrivee D-03 with a B-Band preamp. Though the D-03 is considered their entry level guitar, it still put me out by about 950.00. I knew little about Larrivee before I first picked this up, but became an instant fan. I was at the local Sam Ash's trying out various Taylor and Martin guitars priced at a higher rate, and for kicks, picked up the D-03. I was sold within minutes, but spoke about it over lunch with my wife. This was probably about 2 years ago, and I have used it at fire camps, plugged in at church, at home and anywhere. Sounds great unplugged, and sounds awesome plugged in.

For electric, I have been playing a Schecter Diamond Series 006 Elite. The Elite 006 was a pleasant Christmas surprise from my significant other going back about 5 years now. From metal to blues and everything in between, the sound has been great. I do plan on changing my humbucker out to something with better pickup clarity, but other than that, I have no complaints whatsoever.

Now, going back in time, my first guitar was a folk guitar built by Sears, I believe. This was a birthday gift from my parents. I wanted an electric, but they got me the folk. I did learn Smoke on the Water and Stairway to Heaven on it, but I did not get too much into it back then. By the time I was 17, that guitar was so destroyed, I decided to put it out of its misery and smash it. >Sniff<

At around 14 or 15, I finally landed an electric guitar. This was a heavy Ibanez that had terrible action and the pickup was crap. I kept this for a couple years, eventually giving it to my uncle, who now passed it on to his 15 year old son. I think they put some work into it, and it probably sounds better than ever. I would have retained it, had I known then what I do now about hand-built Japanese guitars (try buying a guitar made in Japan today).

At about 17, I got a rather small Washburn, with white paint, a whammy bar, and a new set of strings all for 150.00. Around the same time, a friend gave me her Martin acoustic. I wish I still had that, but sadly, it is no longer breathing (not my fault). The Washburn served me for about 5 years, as I was a poor student with no disposable income. I finally gave that to one of my roommates who played the drums, but had a small interest in the guitar.

Along the way between my Washburn and Martin, I have also had a Takamine Acoustic (given to my sister-in-law, this one was technically my wife's), a Giannine Classical (old thing, but worked ok), and a 12 string of which I cannot remember the name, and couldn't stand to play anyway.

I plan on keeping my current guitars, as I am forever sentimentally attached to them. My next major purchase will probably be a new amp for the Schecter, as the 30 Watt Marshall is not sufficiently loud enough for bragging rights.

Until next time, reply back with your favorites or your dream guitars. Remember to keep the practice sessions up, and don't let yourself become discouraged. The guitar was meant for enjoyment after all.
Posted by Guitar Man at 11:04 AM No comments:

The Pentatonic Major Scale is a great introduction to scales. As identified by its name, the pentatonic scale simply has 5 notes, whereas, the regular major scale has 7. The value of the pentatonic is that once learned, you can solo using the various notes of that scale over any key. So, if a song is in the key A, you find your root of the scale (A) and go from there.

Since we are on the C chord forms of CAGED, we'll look at playing the Major Pentatonic using the C form in the key of D.

Here again, is the setup for C Form D: 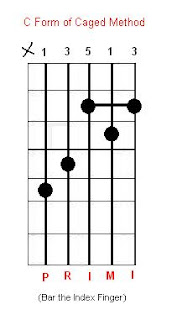 Remember, that with C form anychord, your setup is always Root, 3rd, 5th, Root and Third. Remember to always identify your roots. For C form, they are on the A string and the B string. Now having identified the roots, remember where the Thirds and Fifth fall in. 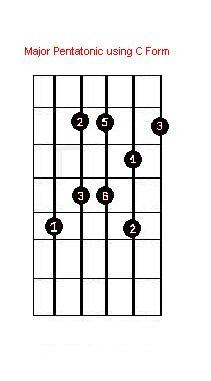 Use your pinky finger to pluck the 1, the index to play the 2, the ring to play the 3, index the 5, ring the 6, middle the 1, ring the third, and the index the 1. Play this scale slowly up and down repeating the numbers, and remember to always identify your roots (1s).
Posted by Guitar Man at 8:21 AM No comments: